Chapter 3: Golden Horatio Versus The Mudman 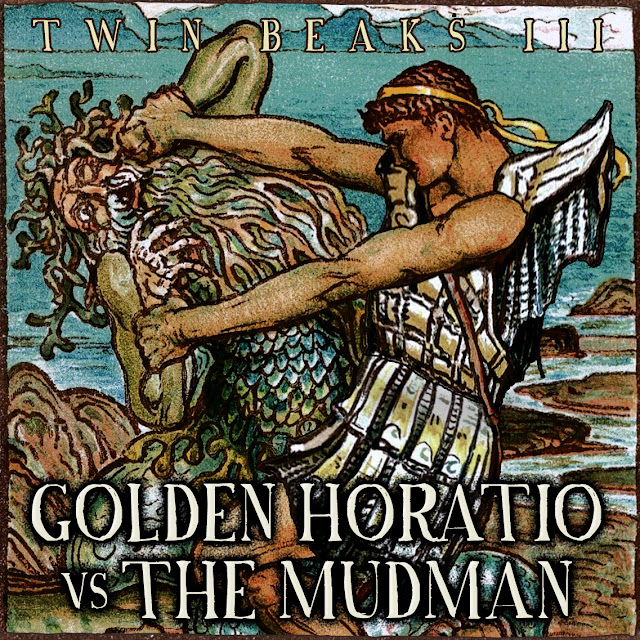 Horatio's Drunken Journey Thru the Mysterious Swamp / The Unwitnessed Birth of Mudman: Golden Horatio was obsessed with Beauty -- so much so that his quest for a Beautiful Child led him to reject offspring after offspring, until he layed and sired with every able-bodied woman in the land. Each child, while seeming perfectly acceptable to all others including the many mothers, was neglected by Horatio who claimed the children did not conform to Golden Proportions.
When it seemed he had exhausted (himself and) every option for suitable mating, he came across the rumor of the Forest Fairy. Legend told that the Forest Fairy was exiled to live in the Forest a thousand years before, due to the fact that her Beauty was such that it put others in the land to Shame. It was also said that her Immortality surpassed even her Fertility, which surpassed even her Beauty. So naturally, Golden Horatio set off in search of the Forest Fairy.

Mudman's March (including 2 washroom breaks): After a perilous but enlightening journey thru the Forest, Golden Horatio was disheartened to learn that a year of searching had not been enough to track the elusive Forest Fairy. To soothe his sorrow, he sat alone in the Forest a moment more, drank his last Beer, tossed the empty can into the Swamp, and left.
But unbeknownst to him, he had once again planted an imperfect seed. For it seems that the Fairy's magic had been spread throughout the Forest, even in the vile Swamp which Golden Horatio had mistaken for a refuse heap. By the time he had left the Forest, a drop of Beer from Horatio's discarded can had mixed with one of Horatio's equally discarded teardrops, which in turn mixed with the Magical Swamp Gas... and the misshapen blob of ooze that rose from the Swamp would be called, later on in Fairy Tales such as this, The Mudman.

Warmth & Width: Mudman F*cks the Friendly Forest Fairy: Like most abandoned children, The Mudman began immediately to experience all that Life has to offer. For he, this involved a brisk walk through the Forest, where he learned to Eat and Shit, in that order. After mastering the first two Great Vices, he then unexpectedly stumbled across the final third.
For after witnessing all this and more, the Forest Fairy finally emerged to greet the newcomer. After convincing The horribly disfigured yet surprisingly shy Mudman that she was not in fact "mommy", she suddenly realized that the only Cure for a hundred lifetimes of loneliness was the Disease that caused it, and so she proceeded to seduce him.

The Death of Mudman: Horatio Returns!: Since leaving the Forest, Golden Horatio's despair had multiplied, and to cope, so had his drinking efforts. The now suitably re-emboldened Molson Golden Horatio returned to seek out the Forest Fairy once again.
But this time he was surprised to hear strange sounds echoing within the usually silent woods. After following them intently, he came upon a clearing, where he came upon the Forest Fairy, where The Mudman came upon her.
Seeing all at once what he believed to be most Hideous, defiling what he believed to be most Beautiful, Golden Horatio drew his Golden Sword from its Golden Scabbard, and made one Perfect Golden Strike through the Golden Heart of The Mudman.
As The Mudman slumped further over and began to un-ooze back into the Swamp from where he spawned, Horatio turned to look upon the Forest Fairy.
And then, as the sun suddenly burst through the treetops and glimmered on The Forest Fairy's Golden Hair, Horatio finally came to realize both what he truly seeked, and what he truly found.