Chapter 12: The Corn, The Crow & The Cadaver 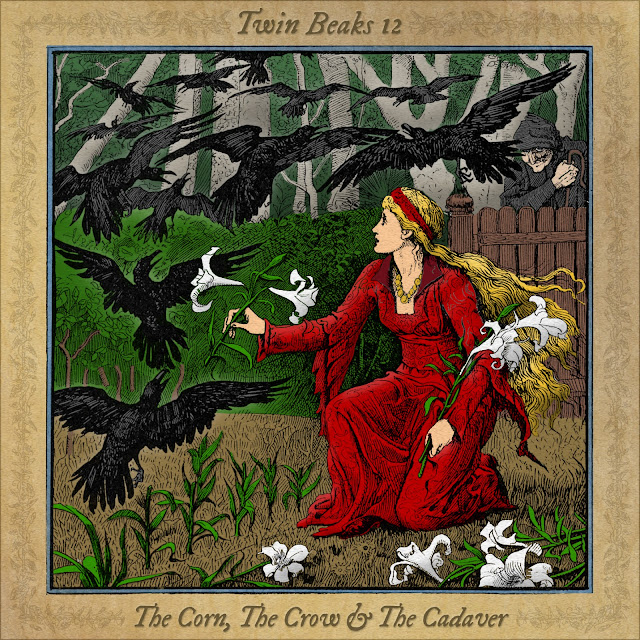 SIDE A: Jebediah & Archibald


Pitchfork Blues: On Jebediah's deathbed, Archibald vowed to watch over their beloved cornfield - but the untrusting Jebediah was unrelenting in his dying wish: to be buried among the corn stalks, so that his soul could eternally stand guard. So immediately following the funeral, Archibald found Jebediah’s old dusty pitchfork, and used it to clear a plot among the corn stalks to lay his brother's bones to rest.
The next morning, Archibald woke to find that crows had devoured all of the corn surrounding Jebediah's grave. Ever mindful of his vow (and ever fearful of infuriating his brother's ghost), Archibald quickly cobbled together a makeshift scarecrow - whistling a mournful but hopeful tune as he worked - and set it to stand vigilant over Jebediah's grave.

To Help & Back: But this scarecrow had none of the desired effect: for the next 30 days, the crows steadily consumed almost every last kernel of corn that had sprouted. Archibald was beside himself with anger and frustration, until one fateful night when his dreams were haunted by an apparition of his deceased brother. In the dream, Jebediah rose from his grave, devoured the crows in a horrible, bloodbathed featherstorm, and then returned peacefully to the earth.

Carrion Crawlers: This omen inspired Archibald to grab his crusty pitchfork and set out once more, this time to unearth his departed brother's bones and fashion a new, improved scarecrow. The maggot-ridden corpse he found underground at first discouraged him, but then he realized that the more hideous the scarecrow, the more effective it could be.

Eating Crow: The resulting mass of maggot-ridden limbs and loose straw, propped up against a knotted, rotted wooden beam, was quite frightening indeed. And as if that wasn't enough, Archibald then added the final touch: he placed a dead crow in the scarecrow's mouth.

The First Cult is the Deepest: But once again, the results were not what Archibald predicted. Instead of simply remaining lifeless and naturally repelling the crows, the new scarecrow uncannily sprung to life, and unnaturally used surprising charm to beguile the crows and organize them into a dark avian cult with which to carry out his unholy bidding. The crows, being naive, simple-minded bird-brains, were eager to follow the first leader they encountered.

Ambushed!: And the scarecrow's bidding (perhaps a twisted iteration of Jebediah's soul yearning to reclaim his beloved cornfield) was to overthrow the farm’s current caretaker, Archibald. So the trap was set, and when Archibald next came to tend to the crops, the crows burst out from hiding in the corn stalks and engulfed him in a whirlwind of terrorizing talons and pulverizing pecking.

The Last Straw: But Archibald, summoning all his strength to defend his brother's honour, and wielding his rusty pitchfork with the skill of a samurai, somehow managed to fight off the crows. Nearly pecked to death, limping, bleeding and gasping for breath, he then had just enough stamina and resolve remaining to dismantle the horrible scarecrow, clumsily but quickly separating the rotten flesh from the remains of the hay.

So Long, Suckers: Some time after that, Archibald set one final task to his trusty pitchfork. This time whistling a melancholy tune, he set out once and for all to bury his beloved brother, every crow cadaver that had fallen on the field, and every last infernal kernel of corn.

SIDE B: Genius is Mysterious