Chapter 13: The Plague of Allegiance 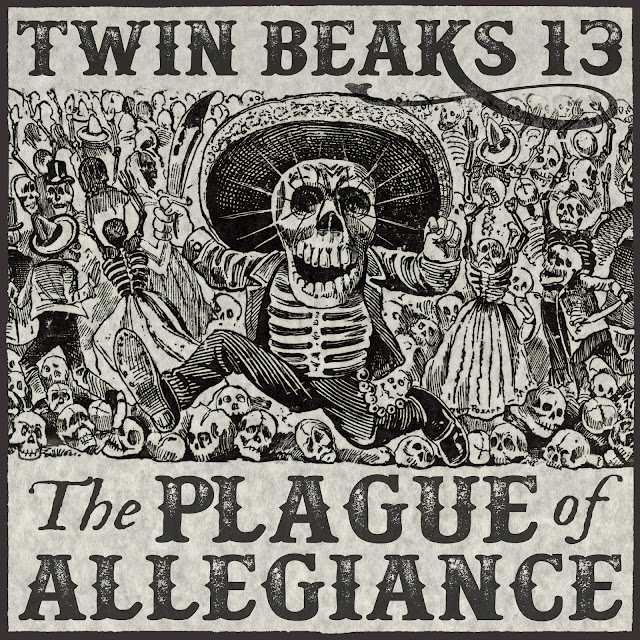 SIDE A: The Boy & The Bandolier


Infernal: Each morning, the widow awoke to mocking sunlight promising a better day that would never come - while far below the earth, the devil woke, sipped his morning coffee and planned his day.

Veni Vidi Veni: Each night the stranger walked past the home of the man he took his revenge upon years ago, his memories consumed him with anger - and with the devil's help, drove him to enter and once again force himself upon the defenceless widow.

Giving Everything To Anyone: Each night the stranger arrived, the widow mother feared for the safety of her boy who was too young to defend himself - so rather than challenge the intruder, she closed her eyes and pleaded for the devil's interference, only intermittently losing focus and returning to the horrible reality atop her.

The Promise: The devil visits the young boy and presents a solution to which the boy accepts, and pledges his loyalty in gratitude.

Bandolier: After this, each night the stranger arrived to ravage the widow mother, the boy would sneak into the bedroom and steal 1 bullet from the stranger's pistol - until years later, when as a young man he had finally collected enough bullets to fill his dead father's Bandolier, along with the courage to challenge the intruder to a duel.

The Plague of Allegiance: Surprised to find that slaying his enemy had only increased his thirst for revenge rather than quenched it, the young man seeks out the devil once again - only to learn the true nature of the pact that has cursed him to forever walk the earth as the monster he tried to destroy.

Perseverance: Each night, someone prays to the devil to be released from their infernal cycle.

SIDE B: The Devil & The Discotheque


Welcome Waggin': The devil gets dressed for a night at the disco (bell-bottoms, trident)

Blushing Bribe: The devil arrives at the disco, crashes a bachelorette party and rallies everyone into his entourage.

50 Ways To Leave Your Liver: The devil starts a drinking contest - he downs 50 different shots, challenges others to follow, and watches gleefully as the drinks and competitors fall one by one.

Bastard's Boogie: The devil hits the dance floor and struts his stuff.