Chapter 22: Bigfoot Versus The Lochness Monster 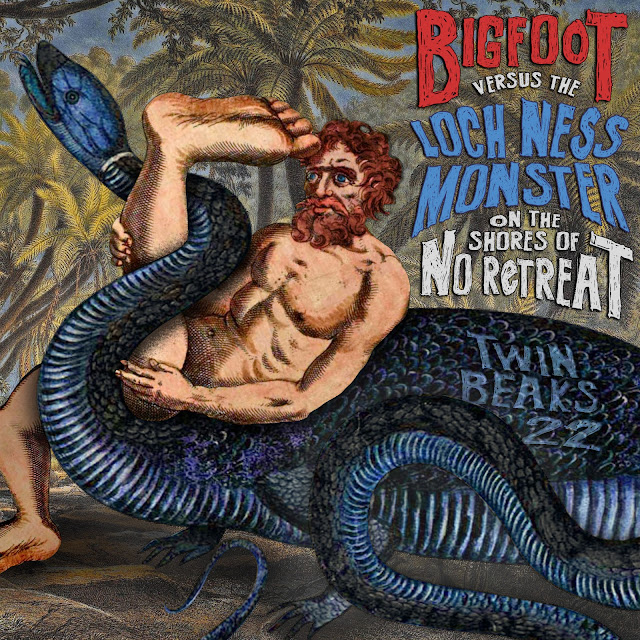 Side A: Bigfoot Versus The Lochness Monster

While one day randomly visiting the same shore, Bigfoot and The Loch Ness Monster noticed each other. Nessy, overjoyed to discover another monster of mystery such as herself, assumed she had finally found a soulmate, and immediately fell in love. Bigfoot, being a simple-minded creature of instinct, assumed he was under attack and prepared to defend himself from his moist new foe.

An epic grappling match ensued between the two titans: one merely yearning for the embrace that would end a eon of loneliness, the other fighting instinctively for survival, and both unable to realize the other’s objective was opposite their own.

But when it was finally over, they both walked away content, each presuming to be the only victor.


Side B: Vivian O'Blivion In The Jungle of Curious Delights

The Prodigal Stunt: Seeking inspiration for a new adventure, Vivian consults the Fortune Teller - whose warning to avoid the Jungle of Curious Delights only intrigues her. Throwing caution (of self-fulfilling prophecies) to the wind, Vivian seeks out and ventures into the Jungle of Curious Delights. Once deep inside, she is pleased to discover many exotic and delicious-looking flowers, which she proceeds to collect and sample.

Jurupa: "Umm... these flowers are TOO TOUGH."

Cadaver / Can't Have Her: After having collected and eaten various tasty but poisonous Jungle flowers, Vivian becomes ill - first with fever, then bone-chilling shivers, and finally the exhaustion that overcomes her. Soon after, a Wandering Woodsman comes across her unconscious body. He then carries her to the outskirts of the Jungle, where she wakes, thanks him, and gives him her last remaining flower.